Yep, our biggest boy will finally move-in to our residence, physically (he's already moved into our hearts), on Saturday! We are so excited! He is too, although I think he tries not to show it too much. He will have his last basketball game at his current school, then we will get the rest of his stuff and move him in! He should start at Durant on Monday-we're still working all of that out. The kids can hardly believe it's time for him to move in-it's been so hard having to take him back to his foster home each weekend. He just brightens up our lives, makes things more fun, and I think we just see the world through a different lens when he's around. He is such a wonderful guy-I couldn'thave designed a more amazing child-if I had the means to, that is.
We talked about the process from here out with him, which is-once he moves in, he has to live with us at least 90 days and then we can finalize the adoption, which means he will officially be a Bourne. He asked if he could change his name then, to which we replied yes, he can take our last name if he wants to. He was excited about that, but then he said he wanted to change his whole name! That was very surprising to us, because for 16 years he's been Marvel! He came up with a name that he likes, but I am going to wait to share it, in case he changes his mind. I asked him if he wanted to keep any of his name, maybe as his middle name, and he just shook his head and made a face-like "no way". So this says a lot really, but basically, he wants to belong to us. It makes no difference to us what his name is, so whatever he chooses will be fine, we just want to love him. It will be strange to start calling him something else, but we want whatever he wants.
He is just too cute! He is talking about getting a job, and doing chores, how he will do things when he is "a man", just planning things out the way kids do. We watched Courageous this weekend, and it was awesome! He somehow, already has those values that the movie talks about, and totally agrees with every bit of it. We talked about dating and how our family sees dating as "courting" or preparation for marriage, not some extra-curricular activity, so we'd rather him not start dating, until he was ready to prepare for marriage-which he agrees is not now. It's so strange how God has placed all of our family values and morals in him-despite a very broken background. I keep saying that he fits right into our family, and I can't explain it, but it is like he has always been here. He and Bailey are such buddies, and it is just precious to watch them just talk or joke, or chase each other around with fake poop(their favorite game). All of the kids just have a special big brother bond with him, that you could never imagine would develop in 3 months, but it has. We will all be forever changed and blessed because of him, it is just incredible-at the very least. I know that things may change, once he's settled in, but I don't think it will be anything significant, and I know that the blessings will far outweigh any troubles that we face!
I am going to take a moment just to say that if you have ever considered adoption, or even if you haven't, please pray and ask for wisdom, and take some time to reconsider-and know that you will be SO blessed by loving an orphan-no matter what age, gender or the color of their skin!
I'll talk to you soon! 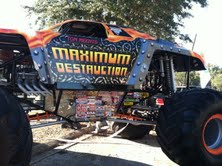 This truck was just hanging out on Friday on the way home from school! It just happens to be Marvel's favorite-too bad he missed it:(
Posted by Jen at 11:31 AM 1 comment:

I have been so bad, not posting any blogs!
Things have been great! Marvel has spent every weekend with us, including a week during Thanksgiving break and a week during Christmas break. We have been to all of his basketball games, which his team has won every one of! That is a fun and different experience for us. He continues to bring more and more of his things to our house, to stay. It is so cute to see him arranging his room the way he wants it. We usually just hang out at home, and he seems fine with that-he just watches TV, jumps on our new trampoline, listens to his Ipod or plays on the Wii......typical teenager. He also got a guitar for Christmas,which he plays on, but on Christmas he was playing my sister's bass guitar, which he really loved. So she let him borrow it. Our theme song of Christmas was Crazy Train by Ozzy Osbourne, his favorite thing to play on the bass! But, he actually likes to hang out with all the kids, too- even plays silly games with them. He is just such a joy to us. He was having some behavior issues at his foster home, probably due to the stress of transitioning into a new family, but we talked with him about it, and he seems to be doing better now. He still wants to move in after basketball season-which his last game will be Jan 28th, so it could be that weekend that he moves in. That will be such a blessing! No more driving an hour each way to pick him up and drop him off, no more packing and un-packing, no more planning our weekends around picking him up and dropping him off, and best of all.....no more good-byes!
It gets harder and harder each time to say good-bye-for all of us! I almost lost it when Kevin had to take him home after Christmas break....it was awful! The kids keep saying "I miss Marvel", and Bryson just wants him to "stay for 90 days" -because after 90 days of living with us, we can finalize the adoption-so I guess he just wants it done! I won't lie-this part is hard! We all feel like something is missing when he's not here, but we know it won't be long until he's with us forever! I can't imagine how hard it is for him!
Oh-I got a "new" car! We knew we would need a bigger car soon,  the mini-van sat 7, but with a lap belt only in the middle of the back seat-which I wasn't comfortable with. So we researched and looked, and ended up with a 2006 Ford Expedition-red! I love it! And it has a DVD player in it-which is a lifesaver on our hour-long drives to get/drop-off Marvel!
The kids are getting back into the swing of school again, but I so loved having them home. It's always after long breaks that I start dreaming of homeschooling again-I really don't like them gone from home all day, but I still don't think I could handle it. I try to remember how stressed I was for the semester that we tried to homeschool. If only school was just a half day, that would be perfect! I really could care less that my children are "educated"-at least in the world's sense. I think it is far more important for them to have good character and integrity, to learn to love others and serve God, than it is to have all A's or a degree. I know, people will argue that they need a degree to succeed ,and need to succeed to make it in this world-but I disagree. Not that I want my children to be homeless, jobless and irresponsible-not at all, just aware of what's important and humble. Well, ok.....sorry to go off on a rant, there!
It is freezing here in central Florida today-freezing meaning 48 degrees. But compared to the low 80's last week, pretty darn cold! I don't like cold! It's funny, I dream of living in the mountains, but I don't think I'd survive a winter! Guess I'll just have to visit more, which I hope to do this year. I don't do resolutions, but I LOVE to plan vacations! I'll be working on that soon......Spring break will be here before we know it! Until next time!
Posted by Jen at 2:27 PM 2 comments:

Holding up their grade numbers (Kody's in 4 yr old PreK) 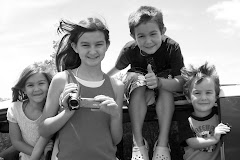 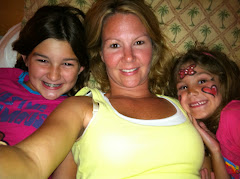